Lillian DiPiazza began her dance training at Maryland Youth Ballet, where she studied for 10 years under the direction of Michelle Lees and Tensia Fonseca and performed in classical ballets such as  Swan Lake, Giselle, and  Paquita and contemporary works by Eric Hampton. In 2007, Lillian was named the National Foundation for the Advancement of the Arts winner in dance. In addition, Lillian also attended summer intensives at Miami City Ballet, Pacific Northwest Ballet (on full scholarship), and the School of American Ballet (SAB), where, in 2007, she spent a year training and performing in such works as George Balanchine’s The Nutcracker® and Jerome Robbins’  Fanfare, and Susan Stroman’s Double Feature with New York City Ballet. During her time at SAB, Lillian not only choreographed a pas de quatre to music by Philip Glass for their Choreographic Workshop, but was also afforded the opportunity to travel to the Kennedy Center as part of the Protégés Program, where she performed  Concerto Barocco.

Lillian joined Philadelphia Ballet in 2008 as a member of PBII. She was promoted to apprentice for our 2009/2010 season, corps de ballet for 2011/2012, and soloist for 2013/2014. In 2016, she was promoted to the rank of principal dancer.  Her repertory with Philadelphia Ballet includes title roles in the classical ballets such as Juliet (Sir Kenneth MacMillan), Giselle, Odette/Odile, Aurora, Kitri, Medora, and Cinderella. It also includes leading roles in dramatic and contemporary works by George Balanchine, Christopher Wheeldon, Jerome Robbins, William Forsythe, Wayne McGregor, Jiri Kylian, David Dawson, Nacho Duato, Liam Scarlett, Trisha Brown, and Matthew Neenan. She has originated roles in ballets by Jorma Elo, Juliano Nunez, Nicolo Fonte, Benjamin Millepied, Hellen Pickett and Russell Ducker. Lillian has been featured in performances internationally and around the United States in festivals such as The Panama Ballet Festival (2019), The Joyce (2016), Chicago Dancing Festival (2016), Vail International Dance Festival (2014), The Kennedy Center’s Ballet across America (2014), Coppelia, National Arts Center, Ottawa (2014).

In January 2020, Lillian took temporary leave to perform with the Paris Opera Ballet, in the Balanchine program.  She also appeared as a special talent dancer in the critically acclaimed feature film Black Swan.  Aside from dancing, she has also earned a Bachelor of Arts in urban studies from the University of Pennsylvania.

Sponsoring a dancer is a fantastic way to show your personal support and helps them achieve their best! Learn More 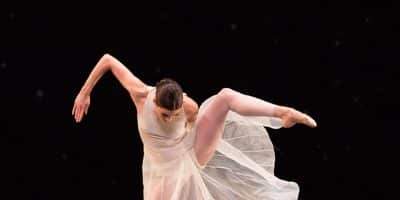